It’s back-to-school time and in addition to those new backpacks filled with books, pens, and paper, students will be packing their smartphones as well. In recent years, administrators, teachers, and coaches have been wringing their hands about what students are saying on social media. Some have considered banning the use of social media on campus and others are adopting strict bullying policies.

Despite what you decide to do about smartphone use at school, it’s time for K-12 schools to start thinking about adding social media responsible use training to their curriculum. Some school districts already have mandatory classes based on approved curriculums and there are lots of great resources out there to help put something together. But what if you don’t have those resources?

After years of traveling the country training students, athletes, and coaches to use social media responsibly I have learned a few things:

Facebook alone has over one billion active monthly users and 13 million of them have never touched their privacy settings, according to research done by Marketo.

According to the latest Pew Internet research (May 2013) on teen online privacy, teens are sharing more personal information on social media today than they were when the first Pew privacy study was done in 2006. Either they do not value privacy or we are failing to educate them, or both.

Do these stats show that young people are more confident about their privacy on social media or that they are less concerned? Sixty percent of teens in the same survey said they have their Facebook profiles set to “friends only” and report high levels of confidence in their ability to manage their privacy. It could be their definition of privacy does not include their personal information. In my experience, teens do not equate the sharing of personal information with privacy. And, they are not 100 percent sure who can actually see what they are posting on social media.

You need to be teaching students the important privacy settings they need to address. You’d be surprised how many students believe that all their social media is private. Screenshots of privacy settings on a laptop and mobile devices help in your training. I recommend walking students through the platforms individually and showing them how to turn on notifications for tagging, disable location, remove email and phone numbers from About sections, as well several other key areas. I also encourage them to unfriend people they do not know personally and possibly protect their Twitter and Instagram accounts.

In 2011, the rap artist Drake released a song called “The Motto” that popularized the acronym YOLO or “you only live once.” The phrase spawned a hashtag on Twitter and other social media that began to epitomize reckless youth behavior accompanied by a disdain for consequences of any kind. But it was nothing new.

Every generation has its carpe diem. When I was young, there was a song by a group called The Grass Roots where the chorus sang, “sha-la-la-la-la-la live for today, and don’t worry ‘bout tomorrow.” Three Doors Down did their version that says, “I won’t look back to regret yesterday, we’re not handed tomorrow, so I’ll live for today.”

Risky behavior isn’t just the moniker of youth. It seems to be the behavior of choice for many celebrities, corporate business owners, professional athletes, and others in the media spotlight. It’s the way to get noticed. Unfortunately for many, it’s also the way to ruin a reputation. Most people cannot afford to be known for despicable behavior. They have to find jobs, make a living, and maybe support a family. In his recent book, So You’ve Been Publicly Shamed, Jon Ronson describes the devastation a social media screw-up can cause. Benjamin Franklin once said, “it takes many good deeds to build a reputation and only one to ruin it.” And in today’s culture, social media is the accelerant that will ruin it quicker than Urkel can say, “Did I do that?”

The biggest challenge for the YOLO generation is to figure out how to live a regular life while building a good reputation at the same time. But prohibition is not the answer. Teachers and administrators also need to remember that social media is the new after school hangout. A seminal book by Danah Boyd called It’s Complicated should be a mandatory read for all teachers. Boyd, a former researcher for Microsoft spent several years doing case studies on how teen communicate on social media. It’s an eye opener. Kids need to be on social media. It’s their community center. Let’s teach them how to use it responsibly.

This is the section of the training where I usually show five good lessons from tweets using screenshots of well know teen idols or athletes that use social media well. I also teach five lessons from bad tweets using screenshots of those that screw up. Unfortunately, the latter is much easier to find. This section also needs to include how to handle negative subjects on social media, how to apologize, and the golden rules of social media posting. I also try and push (sometimes to deaf ears) that social media is forever. Jon Ronson’s book does a very good job of illustrating that if you need some background.

Lowering Your Risk of Cyberharassment

I hope we all know that cyber bullying is rampant. These recent statistics via nobullying.com show the scope of the problem:

In your training, start out by identifying the four basic types of cyber harassment:

Bullying: mean-spirited, degrading behavior meant to intimidate and harass. This could be anonymous or from someone the victim knows.

Unsolicited inappropriate social media content: this usually comes in the form of text messages or emails that are offensive or threatening. Often sexual.

Fake accounts: either an outright stolen identity or parody account set up to pretend to be someone else or make fun of a known person.

Inappropriate sports fan behavior: Crass, mean-spirited posts aimed at a particular coach or athlete. Usually someone the victim does not know.
In my trainings, I then proceed to identify 16 ways students can lower their risk of being bullied online.

I don’t recommend this portion of training for younger students as I think the concept is wasted on most of them. Until they get to high school and are applying for jobs and scholarships, they don’t see or understand the value of building a brand. But it doesn’t hurt to touch on the subject. Many middle school kids are working already. They need to know that their lawn mowing business can be ruined by a bad social media post.

High school students may not be motivated by a career yet, but many have their eye on a college scholarship, whether athletics or academic. It’s been very well documented that recruiters, both athletic and academic, are looking at social media for the same reasons that employers are. Some college coaches are going public to let prospects know their social media was a factor in rejecting them. Some athletes catch themselves in time, but others are hampered by unknowing coaches, school administrators, and parents. Social media has certainly changed the face of college athletics recruiting. And the admissions officers across campus are employing the same screening tactics, according to a 2013 survey by CareerBuilder.

Many high school students are starting to think about a career. They need to understand that what they post on social media now will be available to future employers to peruse. CareerBuilder offers this basic advice:

Integrating these four main concepts into your social media training will give your students and teachers a good knowledge base on how to use social media responsibly.

For more information on how to train students and teachers to use social media responsibly, Chris’ book Practice Safe Social 2.0 is available on Amazon.com. Feel free to email me with questions and comments at chris [at] cksyme.com. You can also follow me on Twitter @cksyme.

Chris Syme has over 25 years experience in the communications industry and is principal at CKSyme Media Group. Her agency specializes in social media marketing, virtual assistant services, and digital communication services for self-published authors and higher education. She is a former university media relations professional. Chris is a frequent speaker on the national stage and the author of two books on social media: Listen, Engage, Respond and Practice Safe Social 2.0. Her agency won the 2014 SoMe Award for Social Agency Of The Year. Her new book, SMART Social Media For Authors will be released in fall 2015.

PIN FOR LATER (image will enlarge when pinned) 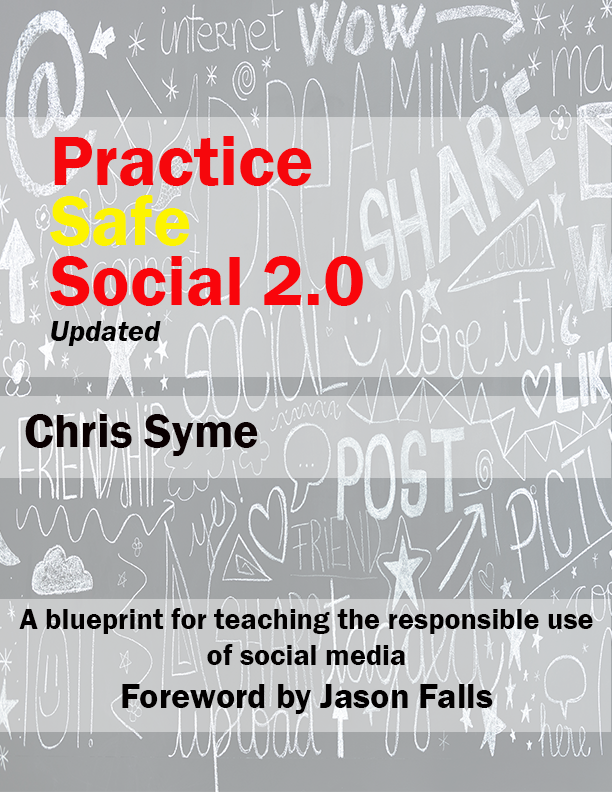