The Randy Vaughn Family on Memorial Day #100for100 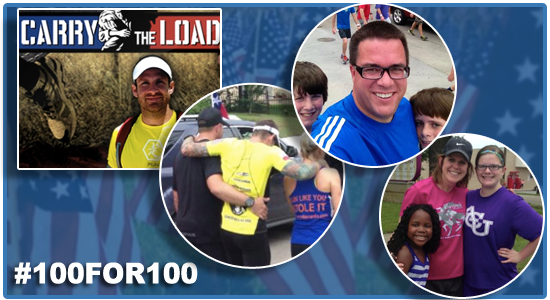 This past Memorial Day, our family made the intentional decision not to just make this holiday about sleeping in, eating a lot of food and hanging out.

We had heard an interview on a local radio station about a Memorial Day fundraiser for an organization called “Carry the Load.” Being a running family, this intrigued me enough to listen further. One of the beneficiaries of this year’s Memorial Day CTL event was to be another organization called “Sons of the Flag”. SOTF is dedicated to raising awareness for and helping burn victims, either soldiers, firefighters, or civilians.

The Executive Director, Ryan “Birdman” Parrott, was being interviewed
on The Mark Davis Show on 660am. “Birdman” was doing something BIG – running 100 miles (Waco, TX to Dallas) to raise $100,000!

Since my wife and I live in Fort Worth close to Dallas, on Memorial Day we woke the kids up early so we could join “Birdman” on his 100 mile run, catching up with him just south of Dallas near Desoto and Ovilla.

We traded turns, with some kids running with Dad while Mom followed the caravan in our Saturn Outlook (there were several other cars along with police and fire truck escort). Then Mom and I switched and my wife got to run on the road with “Birdman” when he hit the 100 mile mark just outside of downtown Dallas!! We then drove the whole family over to the actual “Carry the Load” event. There we saw an amazing number of people and organizations dedicated to celebrating the lives and sacrifices of our men and women in uniform.

I loved it that we were able to talk with our 4 kids at great length about the meaning of Memorial Day (that’s what you do when you spend hours together on the car!)

We used the event to also talk about the sacrifice of Jesus Christ so we could live free, talking on the way there and back about John 15:13:

“There is no greater love than to lay down one’s life for one’s friends.”